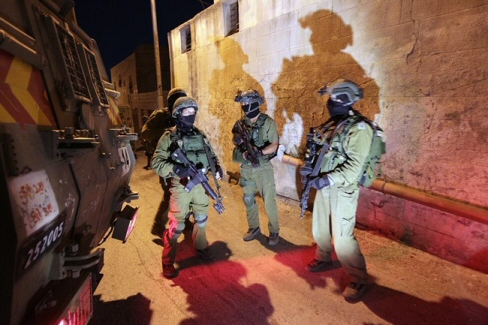 Three Israelis were shot and injured Friday evening, in two separate shooting attacks in the Hebron district, Israel’s army said.An Israeli army spokesperson told Ma’an News Agency that an Israeli was shot and severely injured near Beit Einun, north of Hebron Friday evening. Israeli forces were conducting a search in the area for the suspect.

Palestinian witnesses said that they heard sporadic exchanges of gunfire in the area, with Israeli forces shouting loudly.

Large reinforcements of military forces arrived in Beit Einun, following the incident, with Israeli soldiers raiding a nearby home belonging to the al-Jabari family.

Earlier, Israel’s army said that ‘two Israelis were shot at the Tomb of Patriarchs,’ in reference to the Ibrahimi Mosque.

The spokesperson said that the assailant was unknown and Israeli forces were searching the area, adding that the injured had been evacuated to hospital.

Over 4,000 Jewish worshipers were reportedly in the city at the time for a religious holiday, accompanied by a heavy Israeli military presence in the area.

Israeli media reported that both Hebron attacks were carried out by the same Palestinian group. The reports have not been confirmed.

Earlier today, an Israeli settler was stabbed and seriously wounded near an illegal settlement in Ramallah, with the attacker fleeing the scene.

Shortly after, Tharwat al-Sharawi, 72, was shot dead after Israeli forces said she attempted to run over soldiers in Halhul near Hebron.

A Palestinian was also shot dead by Israeli forces during demonstrations in the Gaza Strip Friday, bringing the total number of Palestinians killed since the beginning of last month to 75.

Nine Israelis have died from individual Palestinian attacks during the same time period.

Hebron in particular has been a flash-point site for recent violence, and residents have come under harsh Israeli restrictions and closures throughout the city over the past month.

Israeli security forces last week closed off Hebron’s Tel Rumeidah neighborhood to all Palestinians except registered residents of the area.

At that time, an Israeli army spokesperson said that, after an increase in attacks in the area, several preventative measures had taken place ‘in accordance with a situation assessment’ done by the military.

Access for Palestinians in and out of Hebron city as well as several Hebron-area villages have also worsened over the past week, forcing residents to travel on longer roads or face long waits at checkpoints.