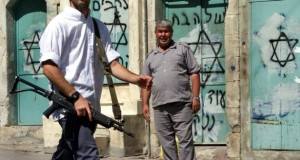 A number of Paramilitary colonialist Israeli settlers attacked, on Friday evening, several Palestinian homes, near the Keryat Arba’ colony, east of the southern West Bank city of Hebron. Soldiers open fire on a car in the city, invade a village near Jenin. The WAFA News Agency has reported that the settlers attacked Palestinian homes in Wadi al-Hasseen area, Jaber neighborhood and Wadi an-Nassara, and hurled stones and empty bottles on the homes while shouting insults, and chanting ‘death to Arabs’.

The attack took place as hundreds of colonialist settlers marched towards the Ibrahimi Mosque, in the center of Hebron city.

In addition, Israeli soldiers fired several rounds of live ammunition on a Palestinian car, driving on a bypass road near Halhoul town, north of Hebron.

Coordinator of the Popular Committee against the Wall and Settlements in southern Hebron Rateb Jabour, said the soldiers opened fire on a car, driven by resident Sha’ban Mahmoud Basal, shattering its front windshield; no injuries reported.

A young Palestinian man, identified as Salama Mousa Abu Jame’, 23 years of age, was also killed by army fire, in the Gaza Strip, while at least 38 others were injured.

The Palestinian Health Ministry has reported that the number of slain Palestinians since October 1st, has arrived to 78, including 17 children and three women.