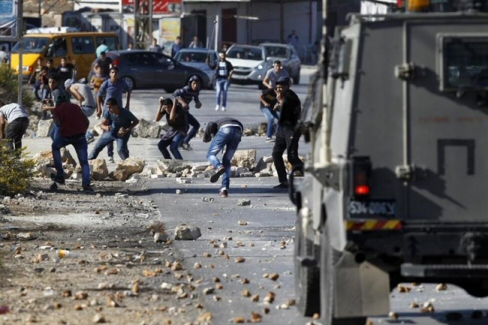 Twenty-nine Palestinians were injured in clashes throughout the Ramallah district, as they broke out between locals and Israeli forces Friday.Locals told Ma’an News Agency that clashes continued for hours in Jabal al-Taweel area and in al-Bireh, near the illegal Beit El settlement.

The Palestinian Red Crescent said that five were injured by live fire as well as five with rubber-coated steel bullets.

Nineteen also suffered from tear-gas inhalation, including a family who was forced out of their home in Jabal al-Taweel after Israeli forces shot tear gas at the house.

An Israeli army spokesperson said that dozens of Palestinians “rioted” near the illegal settlement of Psagot, burning tires and throwing both stones and Molotov cocktails at Israeli soldiers.

The forces attempted to disperse the scene but identified and fired at the lower extremities of “main instigators” when the “rioters” failed to stop throwing stones.

The spokesperson said that the group continued to march to the al-Bireh area and Israeli forces opened fire when they heard gunshots from the crowd.

Earlier on Friday, an Israeli settler was stabbed and seriously wounded near the illegal settlement of Shaar Binyamin in Ramallah.

The attacker fled the scene and Israeli forces were searching the area following the incident.
Clashes also broke out across the Hebron district Friday, as Israeli forces sealed off areas following two shooting attacks that left three Israelis injured.

The shooting attacks came hours after a 72-year-old Palestinian woman was shot dead in Halhul north of Hebron after Israeli soldiers said she tried to hit them with her car.