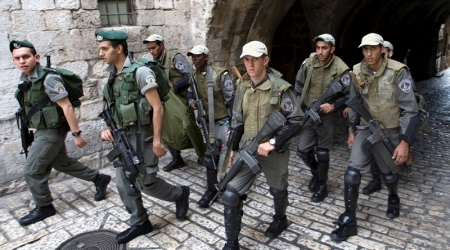 Israeli police forces, Saturday, prevented civil defense crews from accessing the scene of a car accident to offer help to the injured Palestinian driver, who was driving along Anata-al-Izariyeh road when his truck flipped over. Earlier Saturday, Israeli forces assaulted two Palestinians involved in a self-inflicted car accident along Ramallah-Nablus Road, and did not provide them with humanitarian assistance.According to WAFA Palestinian News & Info Agency, a report issued by the civil defense’s department for public relations, stated that their crews rushed to the scene of the accident after receiving a call that a car carrier trailer has flipped over along the aforementioned road, however, Israeli police present at the scene prevented the crew’s access.

The statement said that the civil defense crews remained near the scene of the accident until Israeli police completed the accident report and the driver was transferred to hospital.

Also on Saturday, Israeli forces assaulted two Palestinians involved in a self-inflicted car accident and did not provide them with humanitarian assistance.

The driver, Hamed Makhaltheh, from Nablus, said that the accident occurred after one of his car’s tires exploded as he was driving along Ramallah-Nablus Road, causing severe damages to the car’s body. Both Palestinians; the driver, and the passenger, sustained injuries and bruises throughout their bodies.

A few minutes later, an Israeli army patrol showed up at the scene and began searching the car, while assaulting both Palestinians, and did not provide them with any humanitarian assistance, reported the driver.

Zakriya Sadah, in charge of field operations at ‘Rabbis for Human Rights’ organization, who was reportedly passing near the scene when he noticed the accident and pulled over to offer help, was held at gunpoint by army soldiers, who threatened to shoot him if he didn’t leave the area.

The human rights official denounced this Israeli act, describing it as a ‘disregard for the lives of the Palestinian people.’