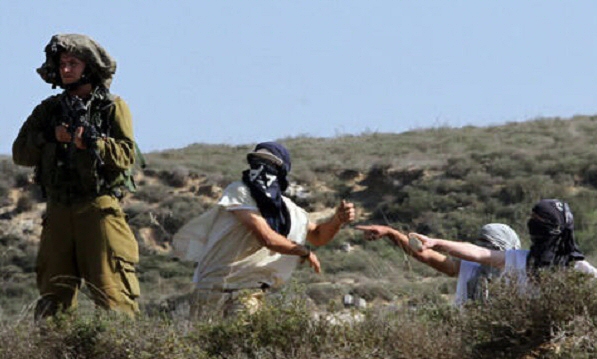 Israeli settlers, on Sunday, attacked Palestinian vehicles passing along Nablus-Qalqilia road with stones, whereas an Israeli settler attempted to run over a group of journalists at Za’tara checkpoint, south of Nablus, according to local sources.Ghassan Daghlas, who monitors settlement activities in northern West Bank, said a group of settlers gathered along Nablus-Qalqilia road and pelted stones toward Palestinian passing by vehicles.

Meanwhile, an Israeli settler attempted to run over Palestinian journalists at Za’tara checkpoint, south of Nablus, while they were covering the Za’tara shooting incident; where soldiers shot and killed Sulaiman Shahin. The Israeli military claimed that Shahin ran over Israeli pedestrian settlers at the checkpoint, according to WAFA correspondence.

Issam Rimawi, a photographer with al-Hayat al-Jadida daily, said a settler rammed his car into a group of journalists in an apparent ttempt to run them over. The settler, following his failed attempt to run the journalists over, angrily shouted profanities at journalists before driving away.

There has been a noticeable increase in violence by Israeli Jewish settlers against Palestinians and their properties across the West Bank districts.

The latest escalation in violence by settlers came in the aftermath of the Israeli attempts to divide al-Aqsa Mosque, Islam’s third holiest place, between Muslims and Jews and the recent killing of the Dawabsha family in Douma, during which orphan four-year-old Ahmad lost his mother, father and 18-month-old brother Ali in a deliberate settlers’ arson attack.

Palestinian officials, including President Mahmoud Abbas, have repeatedly warned that dividing al-Aqsa will have dire consequences on the overall political atmosphere in the region..