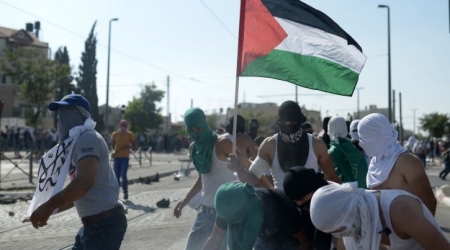 At least three Palestinians were injured with live rounds, while 15 others were shot with rubber-coated metal bullets during clashes with Israeli forces inside the campus of the Palestine Technical University (Kadoorie), in Tulkarem, according to WAFA correspondence.Other Palestinians, mostly university students, also suffocated due to excessive use of teargas by the Israeli army in dispersing the protestors.

The injured were transferred to a nearby hospital for medical treatment, whereas those who suffered from suffocation were treated on the scene.

University administration ordered all students to leave campus, due to the heavy military presence there.

The university campus, located just close to the border fence with Israel, has been witnessing renewed clashes between Israeli forces and students during the past few days.

According to the university’s public relations department, tension has been running high due to continuous attempts by Israeli forces to take over part of the campus land for the benefit of expanding a nearby Israeli military training base.

At least 79 Palestinians have now been killed by Israeli fire during an ongoing unrest in the West Bank since early October 2015. Over 2,270 have been injured.