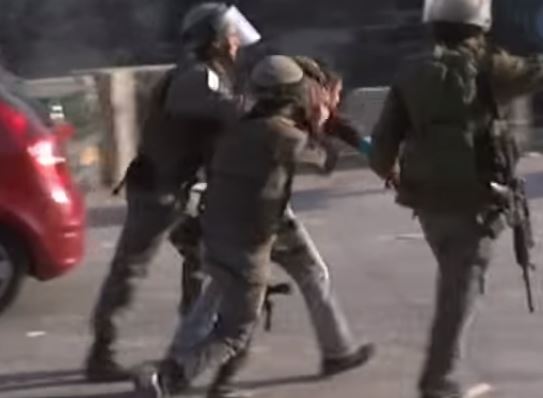 Israeli soldiers kidnapped late at night, and on Monday at dawn, thirteen Palestinians in different parts of the occupied West Bank, including in occupied East Jerusalem, the Palestinian Prisoners’ Society (PPS) has reported. The PPS said dozens of soldiers invaded various Palestinian communities in the northern West Bank district of Nablus, and kidnapped two young men, identified as Mo’ath Ahmad Mousa and Yasser Khaled Manna’, while a resident Abdullah Bahsh, from Nablus, was kidnapped in the southern West Bank city of Hebron.

Also in Hebron, the soldiers kidnapped Arij Masalma, 16 years of age, as she was walking near the Ibrahimi Mosque in the city. Masalma is from Beit ‘Awwa town, southwest of Hebron.

The soldiers also kidnapped Nasri Wasfi Abdul-Hafith, 35, from his home in Shweika village, in the northern West Bank district of Tulkarem.

In addition, the army kidnapped ‘Assem Sweidan, 19 years of age, from his home in ‘Azzoun town, in the northern West Bank district of Qalqilia.

Five Palestinians, including children, were kidnapped in occupied Jerusalem; one of them has been identified as Mohammad ‘Obeid from the al-‘Isawiyya town.