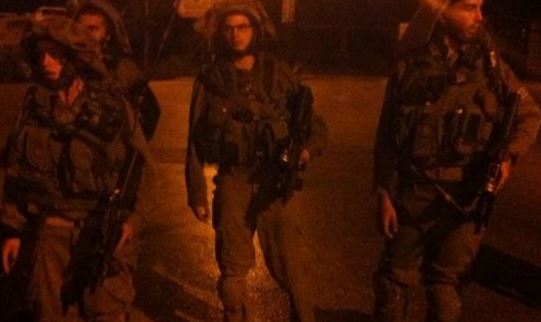 Israeli soldiers have kidnapped, on Thursday at dawn, fifteen Palestinians during military invasions and searches of dozens of homes, in different parts of the occupied West Bank. Seven of the kidnapped, between the ages of 15 and 17, are from Hebron.Several military vehicles invaded the ‘Aida refugee camp, north of Bethlehem, broke into and searched homes, and kidnapped Ahmad Fuad Nofal ‘Adaween, 24, and Sami Hammad Yacoub, 18.

The soldiers also invaded the al-‘Obeydiyya town, east of Bethlehem, and kidnapped Jawad Radayda, while resident Khaled Tafesh was kidnapped from his home in Za’tara nearby town.

The Nablus office of the Palestinian Prisoners Society (PPS), in the northern part of the occupied West Bank, has reported that the soldiers kidnapped three Palestinians, including two children, in the district.

The PPS said the soldiers invaded and searched the home of Firas Khalfa, in Nablus city, and kidnapped him.

In addition, two children identified as Mohammad Haitham Hanani and Mohammad Hussein Abu Heit, were kidnapped from their homes in Beit Forik town, east of Nablus. The soldiers also invaded and ransacked many homes.

In Hebron city, the soldiers invaded a home, belonging to Fawwaz Abu Hussein, in Khal ad-Dar area, and violently searched it causing excessive property damage, and threatened to abduct him.