ISIS – Israeli Style, In Knesset Too 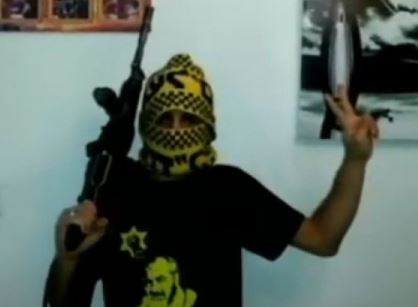 New photos recently emerged, and were also published by Israeli TV Channel 2, of Israeli soldiers — mostly masked — expressing their support to the “Lehava” Israeli terrorist organization, largely ignored by western corporate media agencies, especially in the United States, while explicitly calling for the killing of Palestinians. They even carry flags which are similar to those used by ISIS, and are open in their calls, including “Death to Arabs,” and racist graffiti against not only followers of the Muslim and Christian faiths, but insults and profanities targeting Jesus Christ and Prophet Mohammad, as well.

Channel 2 published clips of soldiers who participated in various events, either through public protests in occupied Jerusalem, or on their personal Facebook pages, showing not only their support to terrorist Baruch Goldstein, but also to Eden Natan Zada, an active Israeli military soldier who, on August 4, 2005, boarded an Arab bus in Shfa Amr, and opened fire with his military-issued weapon, killing four and wounding at least twelve others.

He was beaten to death after he emptied his clip, and was trying to reload for a new round of shooting to continue his terrorist attack.

Baruch Goldstein, an Israeli terrorist from the illegal settlement of ‘Kiryat Arba’, in the southern West bank city of Hebron, who holds dual US-Israeli citizenship, opened machine-gun fire at Muslim worshipers during prayer. He killed 29 Palestinians and injured 135. On the same day, outside the mosque, the Israeli army opened fire towards fearful and panicky worshipers and killed at least ten civilians.

Following the incident, al-Ibrahimi Mosque was converted into a military post and, later, divided into two parts, one side for Muslims and the other for Jews. Thus, the mosque became a point of conflict and constant tension that has marred its former sanctity.

Israeli sources said that a large number of soldiers have posted statuses on social media websites, including symbols and pictures of themselves carrying Israeli-issued weapons, and expressing strong support to Lehava.

Posing for “selfies” and other photos, soldiers on active military duty, and many like-minded fanatics wearing shirts carrying Lehava symbols, all expressed support for Lehava and terrorist attacks against Palestinians, and wrote texts in this regard, including messages supporting, among many others, Zada and Goldstein.

The soldiers called for the killing of Palestinians, and praised terrorist Baruch Goldstein, who massacred dozens of worshipers in Hebron’s al-Ibrahimi Mosque.

They also expressed joy over the brutal death of the Dawabsha family, while others said that they will not “follow military directives that contradict the Halacha.”

Lehava calls for the use of excessive force in murdering Palestinians, while its supporters openly express their support for the terrorist Israeli attack which led to burning the Dawabsha family to death, as they slept in their home, on July 31, 2015.

Ali Dawabsha, only 18 months of age, was burned to death in his crib, after Israeli terrorists firebombed his home. His father, Sa’ad Dawabsha, succumbed to his wounds a week later, and his mother, Reham Dawabsha, also died of her wounds, leaving Ahmad, five years of age, orphaned and suffering with severe burns.

Lehava considers itself an integral part of the Kach movement, formed by Jewish-American terrorist Meir Kahane, who was also the founder and national chairman of the so-called “Jewish Defense League” terrorist organization, before his assassination in 1990.

Although Israeli is aware of their activities, their attacks and plans against the Palestinians, their lands and holy sites, senior member and figures remain at large, not even wanted by authorities, while some also attend government sessions in occupied Jerusalem.

One example of this is Benzi Gofstein (Ben-Zion Gopstein), a student of Meir Kahane, the director of Lehava, and a former member of the Kiryat Arba’ settlement council (2010-2013).

Gofstein even appeared inside the Israeli Knesset on November 11, attending one of its sessions, an issue which shows the level of extremism and fanaticism that the Netanyahu-led Israeli government has sunk to.

Lehava, an acronym which means, in Hebrew, “Preventing the Assimilation in the Holy Land,” is actively involved in attacks against the Palestinians, and works for preventing relationships between Jews and Arabs.

The presence of Gofstein in the Knesset, during its Internal Affairs Committee meeting, caused tension and chaos.

Israeli Ynet news site said that the session was co-chaired by Member of Knesset (MK) Michal Rozin of the Meretz Party, and Bezalel Smotrich of the Jewish Home Party, who personally sponsored Gofstein’s attendance.

Gofstein was even given the podium to speak, and, after he started, several MK’s began shouting insults at him and each other, with many right-wing members expressing their support for him, and favor in allowing him to speak.

His fanatic and terrorist ideology isn’t a secret, it is well known to Israel itself, yet, he is given time to speak in the Knesset.

Back in early August, a Haredi website called “Kikar Shabbat,” reported that Gofstein allegedly called for the burning of all churches and “idols, symbols of worship,” and that he expressed willingness to spend 50 years in jail, in order to achieve that goal.

Many leftist members of Knesset, Arabs and Jews both, called for his removal, and some even dubbed him as the “ISIS representative in the Knesset.”

Even Zionist Union MK Itzik Shmuli started shouting at Gofstein, telling him that he “brings shame on Israel,” and added that he was a member of “ISIS with a Kippah,” before addressing leftist Mks, dubbing them as “traitors.”

The Israeli Defense Minister had previously requested information from Israel’s domestic security agency, “Shin Bet,” regarding members of Lehava and other like-minded groups in the country, to discuss the possibility of officially declaring them to be terrorist organizations… but, such information never even reached his office.

Deputy Defense Minister, Eli Ben-Dahan, said that there are no attempts, or even thoughts, regarding outlawing Lehava or labeling it as a terrorist organization, and that he even made inquiries in the Knesset with regard to the issue.

After photos surfaced, of various Israeli soldiers carrying government-issued weapons and declaring their support to Lehava, Kach and other terrorist groups, and supporting the killing and execution of Palestinians, Israeli military and security services said that “they will investigate the issue and take the proper actions.”

Terrorist groups, including those behind “Price Tag” attacks, are responsible for hundreds of violations and crimes, including the burning of several churches and mosques in different parts of occupied Palestine, in addition to burning Palestinian homes and farmlands, and flooding agricultural lands with waste-water. 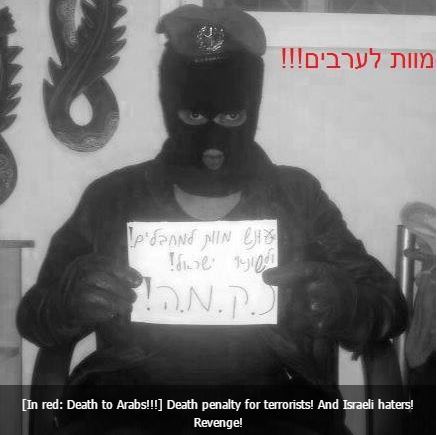