Two Israelis killed when their minivan, allegedly shot at, crashes near Hebron 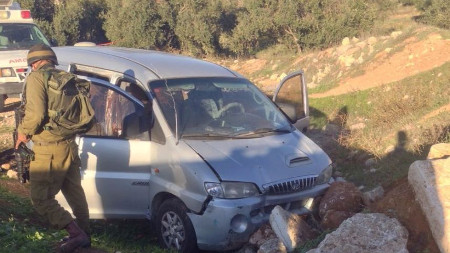 An unknown person allegedly shot at an Israeli passenger car near Hebron on Friday, causing the car to crash, killing the driver and one passenger.Two of the five other passengers in the vehicle were injured. It’s unclear if the deaths are a result of the crash or the shooting.

The incident took place around 3 pm on Friday near the entrance to the illegal colony known as ‘Othniel’, built on Palestinian land stolen by Israeli settlers from residents of Yatta and Dhariya villages.

Israeli forces moved into the two nearby Palestinian villages on Friday after the alleged shooting, and began raiding homes and setting up checkpoints.

Israeli authorities claim that they found fourteen bullets near the car crash, which they say were shot at the vehicle while it was driving.

Those killed were, according to Israeli media, a 40-year old man and his 18-year old son. The wounded were a 16-year old male and a woman, identified by some media sources as the wife of the 40-year old man who was killed.

The deaths of the Israelis in this incident is under investigation by Israeli authorities. The Israeli Prime Minister issued a statement that, “We will find the despicable murderers and bring them to justice as we have in the past.”

The incident follows the deaths of two Palestinians on Friday by Israeli forces who fired live ammunition at Palestinian protesters in different towns in the West Bank.

If these Israelis were in fact killed by a Palestinian attacker, their deaths would make a total of 10 Israelis killed by Palestinian ‘lone wolf’ attackers since October 1st.