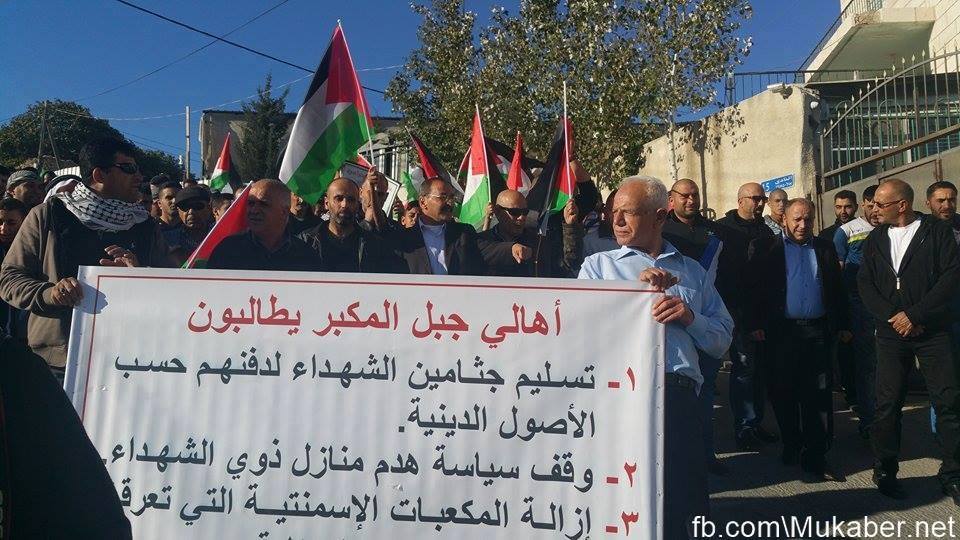 Palestinian medical sources in Jerusalem have reported Friday that Israeli soldiers assaulted dozens of nonviolent protesters marching in Jabal al-Mokabber, in occupied Jerusalem, causing dozens to suffer the effects of tear gas inhalation. The Palestinians marched demanding Israel to transfer the bodies of eleven slain Palestinians.The Palestinians are also demanding Israel to end its deadly siege on their neighborhoods and communities, in different parts of occupied Jerusalem, after the army blockaded them with concrete blocks, and dozens of roadblocks.

They are also demanding the Israeli Authorities to allow the transfer the remains of ten Palestinians from Jerusalem, who were killed by the army in previous attacks, and to void the orders for the destruction of their families’ homes, as such measures are collective punishment, illegal under International Law and the Fourth Geneva Conventions.

Adnan Gheith, Fateh Secretary in Occupied Jerusalem, said the Palestinians have the right to bury their dead in proper ceremonies, and will not stand idle while Israel continues to demolish homes, and destroy the lives of entire families.

Gheith added that the Palestinians would always oppose and resist all attacks and invasions into the Al-Aqsa Mosque, and warned that ongoing violations and provocative tours by Israeli fanatics and soldiers into Al-Aqsa, will only lead to further clashes and tension.

The slain Palestinians Israel is still refusing to transfer their remains are:

It is worth mentioning that the illegal Israeli blockade on Palestinian neighborhood and towns, in occupied Jerusalem, has also led to the death of a Palestinian man, who suffered a heart attack, and an elderly woman, who suffered respiratory issues, after Palestinian ambulances were unable to reach them in time.