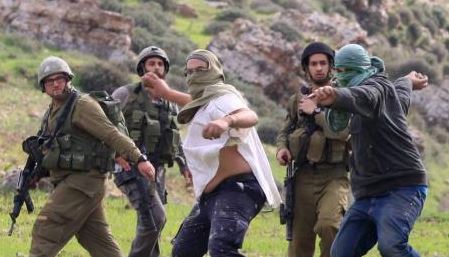 On Sunday, Israeli soldiers and paramilitary guards of an illegal Israeli colony invaded a Palestinian olive orchard in Beit Ummar town, north of the southern West Bank city of Hebron, attacked the family and forcibly removed them from their own land.Media spokesperson of the Popular Committee against the Wall and Settlements in Beit Ummar town, Mohammad Ayyad Awad, said paramilitary settlers of the Beit Ayin illegal colony, built on Palestinian lands, and Israeli soldiers, invaded an olive orchard before attacking and removing Hammad Abdul-Hamid Sleibi and his family from their land.

The orchard is located in Wad Abu ar-Reesh, north of Beit Ummar, close to the illegal colony that was built on privately-owned Palestinian lands.

The security guards attacked the Palestinians and chased them while threatening to shoot them with their automatic rifles, while the soldiers fired gas bombs and concussion grenades on the family, forcing them out of their own olive orchard.

On Sunday evening, eight Palestinians, including a cameraman working for France Press, have been injured, by Israeli army fire, after several military vehicles invaded the northern West Bank city of Qalqilia.

Also on Sunday, Palestinian medical sources reported Sunday that a 2-year-old toddler was injured after an Israeli military vehicle struck him in Bir Niabala town, in the Central West Bank district of Ramallah, and that a woman was injured in a similar incident in Ramallah.

In addition, six residents were injured by Israeli army fire after the soldiers invaded al-Baloa’ area in the al-Biereh city, leading to clashes with scores of local youths.