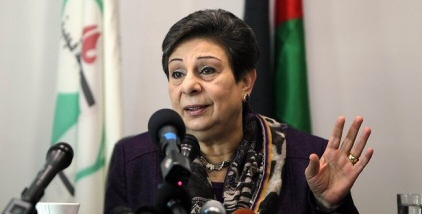 In response to media inquiries, PLO Executive Committee Member Dr. Hanan Ashrawi commented, according to PNN:“In his recent statement, Israeli Prime Minister Benjamin Netanyahu is cynically exploiting the pain of the innocent victims of Daesh terrorism in Paris in order to create a misleading linkage and to justify Israeli state terror against the Palestinian people, while presenting Israel as the victim. In fact, Israel is an occupying power, and the Israelis who are in Palestine are either soldiers of the occupation army or illegal settlers colonizing the land.

The Israeli occupation has habitually terrorized Palestinian civilians, stolen their land and resources and demolished their homes; yet Netanyahu disingenuously claims self-defense while labeling any form of Palestinian reaction as “terrorism.” Nowhere is a people under occupation held responsible for the safety and protection of its occupiers, and nowhere else is a ruthless occupier presenting itself as the victim and justifying its atrocities as self-defense.

The military occupation is an ongoing aggression targeting Palestinians viciously and relentlessly while enjoying full impunity. Netanyahu is attempting to exploit the cruel and inhuman terrorism of Daesh in order to score cheap political points at the expense of the Palestinian people.

His statements are not only fraudulent and politically coercive, they are symptomatic of political and moral bankruptcy.”