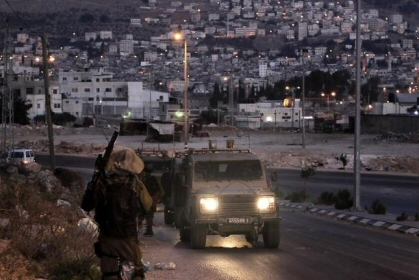 Updated: Israeli forces have shot and killed another Palestinian during armed clashes north of Ramallah, Tuesday evening, with two others injured in an exchange of fire.The Palestinian Health Ministry said the slain Palestinian has been identified as Mohammad Monir Hasan Saleh, 24 years of age, from Ramallah.

It added that the soldiers left Saleh bleeding on the ground for more than an hour, and prevented Palestinian ambulances and medics from reaching him, until he died of his wounds.

The soldiers fired live rounds and gas bombs on Palestinians who tried to reach the Palestinian; the army also kidnapped two Palestinians, and completely closed the Nablus-Ramallah road.

The Israeli army said that shots were fired from a pistol at an Israeli military patrol near Ramallah, with soldiers returning fire and shooting an assailant.

Three armed Palestinians had reportedly exited a vehicle near an Israeli military patrol and opened fire at soldiers near Turmus Ayya, north of Ramallah.

Two Palestinians were injured in the gun battle and detained by Israeli forces.

Israeli soldiers prevented a Red Crescent ambulance from reaching the scene of the incident, a Ma’an reporter said, with the main Ramallah-Nablus road closed by Israel’s military.