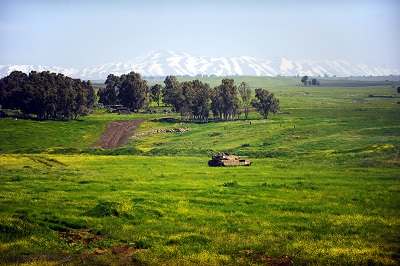 The Israeli Prime Minister’s visit to Washington last week included a meeting with President Obama, in which the two discussed the status of the Israeli-occupied Golan Heights.Israel invaded and occupied the Syrian territory known as the ‘Golan Heights’ in 1967, and has maintained a military and civilian presence there ever since. But the Israeli claim on the territory has never been recognized by the international community.

Now, according to some analysts, the Israeli government has a new reason to secure their illegal annexation of the Syrian land: oil.

Last month Afek, an Israeli subsidiary of the U-S-based Genie Energy, announced the discovery of huge reserves of oil in the region.

The company’s chief geologist in Israel, Yuval Bartov, said the reserves could potentially hold billions of barrels of oil.

Afek’s license to do exploratory drilling was renewed by the Israeli government for two years in October, shortly after the finding of the oil reserves.

But the land on which the oil is located is actually Syrian territory.

And despite the Israeli government claim to the oil, and the licensing of ten experimental wells, analysts say the discovery of oil in Golan may re-ignite the conflict between Israel and Syria over the control of the Golan Heights.