Army Kidnaps One Palestinian, Attacks Another, In Hebron 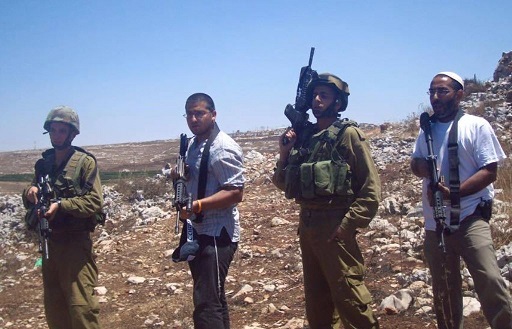 One Palestinian was kidnapped, Thursday, and another resident suffered various cuts and bruises, after Israeli soldiers stormed and searched many homes in Hebron, in the southern part of the occupied West Bank.The soldiers kidnapped Mahmoud Hijazi Bheiss, 24 years of age, from Yatta town, south of Hebron, and repeatedly kicked and punch him.

Another young man, identified as Abdul-Rahman karja from Halhoul town, was also attacked by the soldiers near the Gush Etzion military base, and was moved to a local hospital.

The soldiers also invaded various neighborhoods in Hebron city, stormed and searched homes, especially in Jabal Johar area, south of the city, and the al-Kassarat area.

Clashes took place between the invading soldiers and local youngsters, while the army fired several gas bombs at the Ibrahimiyya and Tareq Bin Ziyad schools, in Hebron’s Old City, causing many children to suffer the effects of tear gas inhalation.

The soldiers also sprayed the schools, and homes, with wastewater mixed with chemicals.

In related news, the soldiers closed the iron gate, installed on the eastern entrance of Doura town, and installed a roadblock on the main entrance of the al-Fawwar refugee camp, south of Hebron, before stopping and searching dozens of cars while inspecting the ID cards of the passengers and interrogating many of them.