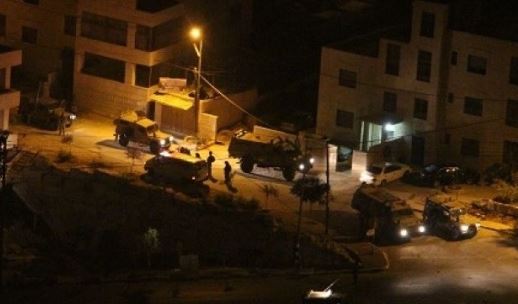 At least two Palestinians have been injured, on Thursday at dawn, while nine others were kidnapped, by Israeli soldiers invading Tal town, south of the northern West Bank city of Nablus.Dozens of Israeli military vehicles and jeeps invaded the town during early dawn hours, and conducted searches of homes, causing extensive property damage, while the soldiers also interrogated many residents.

Clashes took place between the invading soldiers and dozens of local youths, who hurled stones and empty bottles on them.

Some of the owners of the invaded homes have been identified as Abdul-Hamid T’eima Hammad, Mahmoud Mohammad Hammad, detainee Firas Sami Abu Warda and detainee Ziad Abdul-Jaleel Hamed.

In Hebron, in the southern part of the occupied West Bank, one soldier was injured when a Palestinian hurled a pipe-bomb on a military vehicle, in the center of Hebron, after the soldiers invaded it.