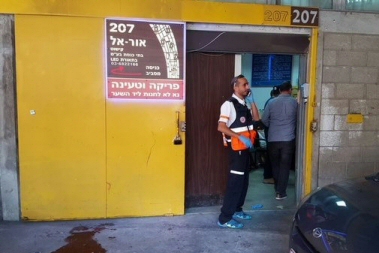 Two Israelis were reported killed and two injured, on Thursday, in a stabbing attack in southern Tel Aviv, according to Israeli police and medics.Israeli police spokesperson, Luba al-Samri, said that a stabbing attack took place inside of the Panorama building, on Ben Tsavi street in the city, leaving a 20-year-old Israeli dead at the scene.

An Israeli who was critically injured died shortly after in Tel Aviv’s Ichelov hospital, al-Samri said, according to Ma’an News Agency.

Israeli police said that the suspect attempted to enter a synagogue inside the building, but was stopped by civilians.

Two different suspects are believed to have stabbed the Israelis, one of whom was a Palestinian from Dura who was captured by Israeli civilians, the police spokesperson said.

The police detained the suspect, who was moderately injured when the forces arrived to the scene, al-Samri added.

Another suspect reportedly fled the scene, according to witnesses, al-Samri said, adding that the incident was ‘under investigation’.

Israeli media reported that the Palestinian suspect received a permit to enter Israel a month ago.

A series of attacks have been carried out by Palestinian individuals on Israeli military and civilians since the beginning of last month, leaving at least 15 Israelis dead.