Many Palestinians Injured Near Hebron 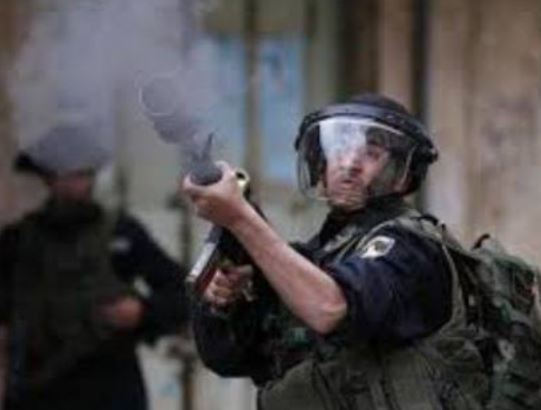 Dozens of Israeli military vehicles invaded, on Saturday at dawn, Beit Ummar town north of the southern West Bank city of Hebron, and clashed with dozens of local youths, before firing gas bombs, causing several residents to suffer the effects of teargas inhalation.Media spokesperson of the Popular Committee against the Wall and Settlements in Beit Ummar, Mohammad Ayyad Awad, said the clashes took place in the Safa Junction area, and that the soldiers fired gas bombs, not only targeting protesters, but also a number of nearby homes.

The Israeli gas bombs caused scores of residents to suffer the effects of tear gas inhalation. They received treatment by local medics, who also provided the needed treatment to a Palestinian who was shot with a gas bomb in his leg.

The soldiers also invaded ‘Erq al-Lattoun area, before invading the home of ‘Ala Mousa Za’aqeeq, after smashing its front door, and several inner wooden doors, before confiscating a computer, three mobile phones and a flash drive.

Za’aqeeq is a former political prisoner, who spent 18 months in Israeli prisons, and was only released two weeks ago. He is currently preparing for his wedding that will be held next Friday.

He said that closing the Palestinian communities, and isolating them, is collective punishment targeting more than 22.000 persons, and added that the soldiers stormed and violently searched homes, causing property damage, and interrogated dozens of residents.

On Saturday at dawn, the soldiers invaded the Hebron district, searched dozens of homes and kidnapped fifteen Palestinians before moving them to a number of military centers.

Also on Saturday at dawn, the soldiers invaded the “Hebron Radio,’ in Hebron city, and shut it down after confiscated its equipment.