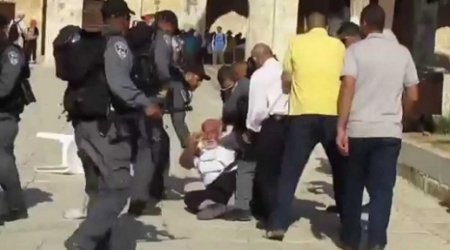 Members of Israeli special forces assaulted, on Saturday evening, 90-year-old Mohammed Abbasi, severely beaing him while he was in the Ras al-Amud neighborhood of Silwan.Wadi Helwah Information Center said, according to Al Ray, that the elderly was in front of his son’s house, in Ras al-Amud, as Israeli troops were hunting the Palestinian youth.

The old man was quoted as saying: ‘I did not expect, for a moment, that they would prosecute or assault me but, suddenly, they pushed me from behind. I fell to the ground, and a number of undercover police officers beat me on the head and chest, using rifles.’

Abbasi’s grandson said that the neighbors responded to the family’s distress, rushing to the scene and taking Abbasi to the health center and, then, to Makassed Hospital.