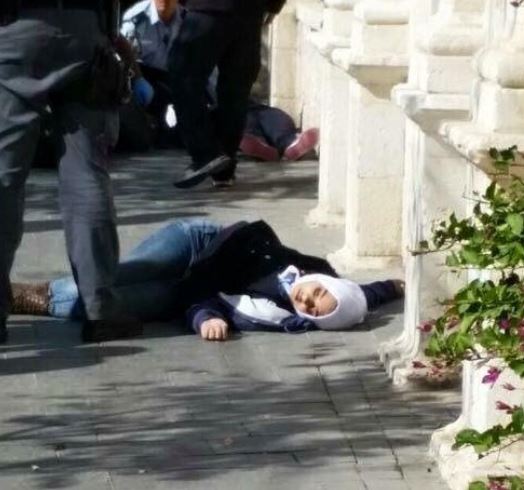 Hadeel is the sister of Mahmoud Awwad, who died on November 28, 2013, of wounds suffered five months earlier after an Israeli soldier shot and seriously injured him with a live round in the head.

He was moved to Hadassah Israeli Hospital in Jerusalem, where he remained in a coma until his death.

According to Israeli daily Haaretz, the two girls reportedly ‘stabbed and mildly injured an elderly Palestinian man, in his seventies, apparently after mistaken him for an Israeli,’ near Mahne Yehuda outdoor market in Jerusalem, and that another man was wounded while trying to stop them.

Israeli Ynet News said the wounded elderly man suffered a light injury in his upper body, and that he is from the West Bank city of Bethlehem, in the occupied West Bank.

Also, an Israeli man, 27 years of age, was injured by a ricochet from a bullet fired by an Israeli soldier.

The army fired gas bombs and rubber-coated steel bullets; no injuries were reported.

Clashes also took place in the ‘Aida refugee camp, north of Bethlehem, after the soldiers invaded it; one Palestinian was shot with a rubber-coated steel bullet.

The clashes started after the soldiers invaded a building in the refugee camp, and used it as a military post and a motoring tower.