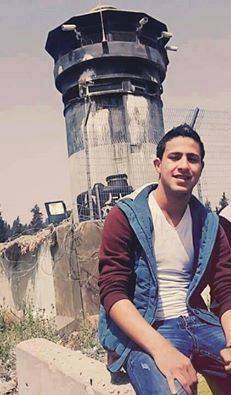 Israeli soldiers shot and killed, on Thursday evening, a young Palestinian man, after the army invaded the al-‘Arroub refugee camp, north of Hebron, in the southern part of the occupied West Bank.Medical sources said the slain Palestinian has been identified as Khaled Mohammad Jawabra, 19 years of age. He was shot with several rounds of live ammunition, targeting the upper parts of his body.

Doctors and Surgeons in the al-Ahli Hospital in Hebron tried to save his life, and moved him to surgery, but he died of his serious wounds.

His death led to renewed clashes with the soldiers, who fired dozens of gas bombs and rubber-coated steel bullets, causing dozens of residents, including many children, to suffer the effects of tear gas inhalation.

The army also pushed more units into various areas in the Hebron district, and surrounded many Palestinian communities, before invading them, and violently searched many homes.

Jawabra’s death brings the number of Palestinians, shot dead by Israeli fire, since October first to 102, including 22 children and four women; one of the slain women, 30 years of age, was killed along with her two-year-old child, in their own home, in an Israeli bombardment of the Gaza Strip.

Earlier on Thursday, a Palestinian man, identified as Samer Hasan Seriesi, 51 years of age, was shot dead by Israeli soldiers, at the Za’tara military roadblock, south of the northern West Bank city of Nablus.

Israeli medics were called to the scene, but stood at a distance, without providing the man with life-saving medical attention.

On Thursday morning, dozens of soldiers invaded Qotna town, northeast of occupied Jerusalem, shot and killed one Palestinian, kidnapped and wounded several others.