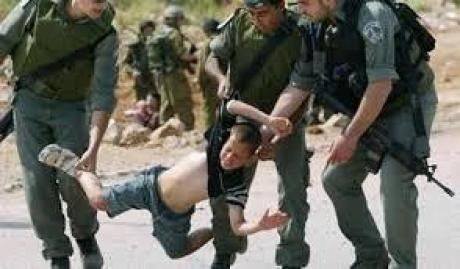 The soldiers kidnapped Abdullah Abu Samra, from the al-Makhfeyya neighborhood, and Sami al-‘Aasi, 16.

The two are former political prisoners who were held by Israel in a number of detention centers.

Also on Friday at dawn, the soldiers invaded the Industrial Zone, in the central West Bank city of al-Biereh, and confiscated surveillance tapes and equipment from Wojoud Institution, and Al-Pinar Dairy Products Company.

The army claimed it located and confiscated surveillance equipment and tapes, knives and 60.000 Israeli Shekels allegedly meant “for Hamas activities in the refugee camp.”

On Thursday evening, clashes took place in the refugee camp, after the soldiers invaded its eastern entrance.

The soldiers invaded ‘Aseeda, Khallet al-‘Ein and ath-Thaher areas, in Beit Ummar town north of Hebron, and broke into the home of resident Mahmoud al-‘Allami before violently searching and ransacking it, destroying furniture and walls, in addition to destroying family pictures.

In addition, the army invaded the ath-Thaher area, close to the illegal Karmie Tzur illegal colony, built on Palestinian lands, south of Beit Ummar, and photographed several homes and surrounding walls, in addition to closing the town, especially its main road.

Furthermore, the soldiers invaded homes in Hebron city, and searched homes, in addition to sending a fax to the “One” Radio, threatening to close it “should the Radio continue the broadcast of programs and songs deemed by Israel to be “incitement,” and “ordering them to change their policies.”