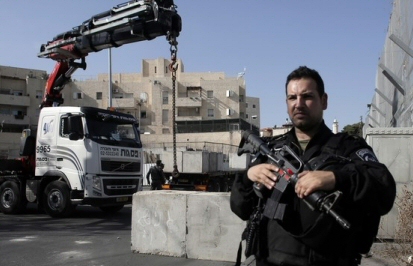 Israeli forces, Saturday, closed a main road leading to Palestinian villages northwest of Jerusalem and prevented residents from entering or exiting the area, locals said.Locals told Ma’an News Agency that a checkpoint was set up on the road, completely blocking residents from moving through the area and isolating them from nearby areas.

Locals said that Israeli soldiers were also deployed near the villages of al-Judeira and Bir Nabala, preventing Palestinians from travelling to other villages in the area northwest of Jerusalem.

Residents of the two villages already face restrictions on movement due to their complete encirclement by the apartheid wall.

The closure began at 10:00 a.m., after which no pedestrian or vehicular traffic was permitted in or out of the villages.

A massive traffic jam resulted from the closures, where hundreds of vehicles were stopped for hours before eventually allowed entry.

An Israeli army spokesperson did not have immediate information on the closures.

Israel’s security cabinet, on Friday, gave the military the liberty to seal Palestinian villages in the occupied West Bank without first receiving approval from the government, according to Israeli media.

A senior Israeli official told Haaretz that military commanders are now authorized to independently implement the total closures while “searching for suspected terrorists.”

The military was already carrying out the decision without such approval prior to the cabinet’s Friday meeting, the report added.

Despite the cabinet’s approval that apparently legally expedites the ability for the Israeli military to enforce closures on Palestinian towns, residents already faced mounting presence of the forces this month and last.