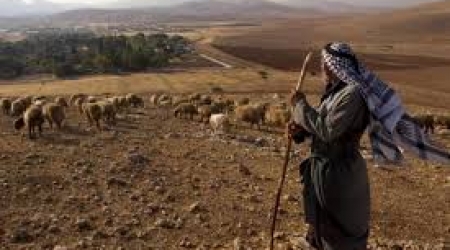 Israeli forces confiscated, on Monday morning, water pumps which supply Khirebt al-Deer in the Jordan Valley, near the border with Jordan, depriving farmers of their sole irrigation source. Also on Monday, 10 tents donated to Palestinians in the Jordan Valley, by the International Committee of the Red Cross (ICRC), were also taken. Ahmed Makhamreh, one of the locals, said that the water pumps used to irrigate about a thousand acres in al-Kherba, but that the military sought to expel the owners to expand agricultural settlements surrounding al-Deer.

He added, according to Al Ray, that al-Deer, located in east of Ain Beida, includes dozens of Palestinian houses belonging to farmers and ranchers. It is the closest Palestinian population to the Jordan River.

He stressed that the Israeli occupation has tried, by all means, to cancel this gathering through imposing restrictions on the people living there. The army continues to destroy their houses, impede their movement and supress them by cutting the water supply.

In related news, the ICRC stated on Monday: ‘This morning, Nov. 30, 2015, Civil Administration and military personnel arrived at al-Hadidiya in the northern Jordan Valley and confiscated ten tents donated to residents by the ICRC and the local council, after the Israeli authorities demolished their homes last week… The families are without shelter at the moment.’

Four of the tents served as housing for the 19 Palestinian villagers, including six children, while a further six were reserved in case of future demolitions.

Israel’s Civil Administration destroyed the families’ homes in 2011, but they had since been rebuilt.

‘Using the excuse of enforcing building laws, Israel is pursuing a policy designed to reduce the number of Palestinians living in Area C, by making their lives there intolerable,’ Israeli human rights group B’Tselem said.

‘This government policy, which has been systematically implemented for years, constitutes the forcible transfer of protected persons inside the occupied territory — whether directly by demolishing their homes or indirectly by creating unlivable conditions.’

According to UN statistics, Palestinians now represent the largest refugee population in the entire world.