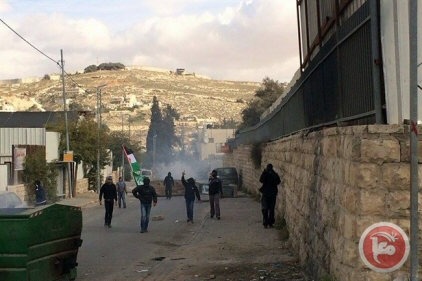 Clashes broke out between Palestinian youth and Israeli forces during raids in the occupied East Jerusalem neighborhoods of Silwan and al-Isawiya , on Monday. Late Sunday, Israeli extremist settlers sprayed Anti-Arab graffiti on a car near Bethlehem, pledging to kill Palestinians in the area, according to local sources.Israeli forces raided the Ras al-Amoud, al-Thuri, Ein al-Lawza and Beir Ayyoub areas of Silwan, Majdi Abbasi of the Wadi Hilweh Information Center said.

An Israeli police spokesperson did not provide comment on the raid or subsequent clashes.
Locals in Silwan said Israeli forces surrounded an area near the family home of 17-year-old Ayman Abbasi, who was shot dead by Israeli forces on Sunday during clashes in the neighborhood. Witnesses said Israeli forces shouted curses at the boy’s family.

All businesses and institutions in the neighborhood were closed on Monday in mourning of the 17-year-old’s death.

Israeli forces also raided the Abu Riyala area of the al-Isawiya neighborhood, leading to clashes between local youth and Israeli forces, a member of the local monitoring committee in the village Muhammad Abu al-Homos said.

In addition to raids and clashes, Israeli forces entered the Jabal al-Mukaber neighborhood of occupied East Jerusalem to finish a home demolition that took place earlier last month at the request of the family of Ghassan Abu Jamal, whose home was destroyed last month in a punitive home demolition.
Abu Jamal was shot dead along with his cousin, Uday, after they killed four Israelis in a high-profile attack on a synagogue in November last year.

The family said that following the punitive demolition, walls of the family home were still left standing. The Abu Jamal family told Ma’an News Agency they filed a complaint requesting the Israeli army fully demolish the house, as it posed a a safety hazard to people in the area in its half demolished state.

Mohammad Atallah, mayor of Beit Eskarya village, south of Bethlehem, said settlers from the nearby illegal Gush Etzion settlement bloc broke into the village and sprayed anti Arab graffiti such as, “Death to Arabs” on the car of a local Palestinian villager, before they slashed one of its tires.

Furthermore, settlers hung the Israeli flag on vine trees in land belonging to local Palestinians in the area, according to WAFA.

Atallah said the village has been a frequent target of daily violence by Jewish settlers from nearby settlements.

Violence by illegal Jewish settlers in the West Bank is commonplace. They have repeatedly attacked Palestinian property and worship places. Settler violence includes property and mosque arsons, stone-throwing, uprooting of crops and olive trees, attacks on vulnerable homes, among others.

On July 31, a group of Jewish fanatics attacked with fire bombs the home of Dawabsheh family in Nablus’ village of Duma. The attack left 4-year-old Ahmad orphaned, after his toddler brother, Ali, father, Sa’ed and mother, Reham, lost their lives.

According to OCHA Protection of Civilians Weekly report covering the period between 3 and 9 of November 2015, “At least four Israeli settler attacks against Palestinians and their property were recorded in the H2 area of Hebron city, including the physical assault of a 15-year-old boy by a group of settlers, and, on three separate occasions, stone-throwing at Palestinian houses and threatening of families in the area of Jabal Johar, and Tel Rumeida by settlers from the Israeli settlement of Kiryat Arba’, in the presence of Israeli forces.”