Letter From An Israeli Activist 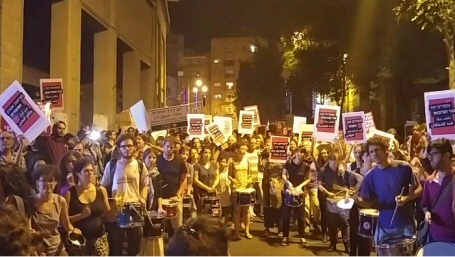 Anti-colonial Israelis have allowed themselves to be cowed into silence.I read your open letter to Israeli activists with great shame. I do not know you personally but from your letter and your background I gather that you are one of the many Palestinians who hold a real belief in human decency, and have not entirely lost hope of finding that decency in Jewish Israelis. For many years, people like you have searched all channels of information to garner knowledge about Israeli acts of resistance against the occupation, and it used to be that such acts could be discovered. Not many, perhaps. But now it seems to me that you perk up your ears and hear nothing but a deafening silence. The least I can do is to break that silence by answering your letter, though I cannot say I bring good tidings.

Your letter is addressed to anti-colonialist Israelis, of whom I am proud to consider myself one. We are the Israelis who believe in the simplest of humanist ideas, such as the principle that all people should have the right to participate in choosing their government, the right to return to their homes, the right to education, to health and so forth. As you must know, among Israel’s Jewish population we are not many. To be precise, we are not more than several thousand from a population of over six millions. And yes, we have let ourselves be cowed into silence in recent times. I see this as the result of two closely interrelated processes: first, our growing isolation from the rest of the Jewish population through the precipitous decline of what is known as the “Zionist left;” and second, the climate of increasingly popular intolerance and mob violence towards Palestinians and “leftists,” a category which covers even those far to the right of us.

These are not excuses. Even if the only effect of our actions were to hearten you and Palestinians like yourself, then they would be worth the risk and trouble. Rather, what I am attempting here is an analysis which you and other Palestinians may choose to take into account in planning your paths of resistance. My understanding is that the audience for anti-colonial ideas within Israel is getting smaller and smaller because Israelis have fewer and fewer reasons to care about Palestinians. The machinery of apartheid makes it increasingly difficult to meet Palestinians as equals, and even the Israeli economy has been largely weaned of its need for Palestinian labor. Demonstrations which are not allowed to come anywhere near population centers can be safely ignored, and the soldiers sent to repress them, who come from the poorest and most disadvantaged sectors of our society, are encouraged to let their trauma curdle into hate. Finally, when desperate Palestinians turn to violence against civilians, our government and media relishes the opportunity to present them, and all other Palestinians, as bloodthirsty animals who hate Jews for being Jews.

I realise it seems that I am leaving no options on the table. But I believe I owe you the truth as I see it, and not empty platitudes. It may be that there is no way to reach the hearts of most Israeli Jews at the present, and that the Palestinian struggle must instead attempt to make an impact on those international forces that could force Israel’s hand if they wanted – most importantly the United States. But this too is easier said than done and I would not presume to have any suggestions beyond the tactics which are currently and successfully being employed, most prominently the BDS campaign.

But, before I end, let me turn your attention and mine to a group of people that is too often left out of exchanges between ‘67 Palestinians and Jewish Israelis – the Palestinian citizens of Israel. Nobody has as much of a vested interest in a peaceful decolonisation than this indigenous minority “within,” and I derive much-needed optimism from the maturity and wisdom that this public has demonstrated in demanding that its factionally divided leadership unite in the Joint List in the last elections for the Knesset. Together with most anti-colonialist Jews and, of course, the vast majority
of Palestinian citizens of Israel, I am a wholehearted supporter of the Joint List and see its formation and continued leadership as a shining light in otherwise very dark times.

I know that I am not offering much. I know that we have failed you and most likely will continue to fail you, and I am ashamed of that. I only offer the small comfort that your voice has been heard by someone across the wall.

Also in Opinion/Analysis: ISIS – Israeli Style, In Knesset Too