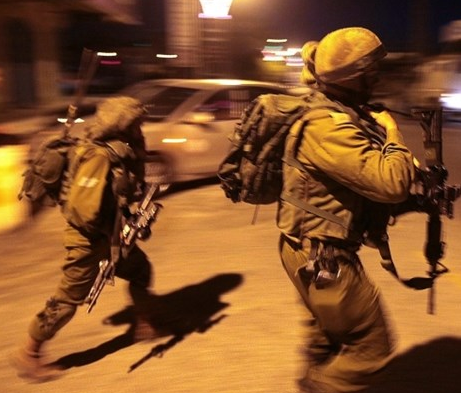 Israeli soldiers invaded, on Tuesday evening, Jabal ar-Rahma area in the southern West Bank city of Hebron, shot and wounded three Palestinians, including one who suffered a serious injury, and kidnapped one resident.
Badea’ Dweik of Human Rights Defenders Coalition in Hebron, said the soldiers fired several rounds of live ammunition, wounding three Palestinians, in addition to storming and searching a number of homes.

He added that one of the injured Palestinians suffered life-threatening wounds, and that the army took him to an unknown destination.

The other wounded residents suffered injuries in the lower parts of their bodies.

In related news, the army invaded Qabatia town, south of the northern West Bank city of Jenin, and kidnapped Amjad Saleh al-Loubani, 40, after searching his home.