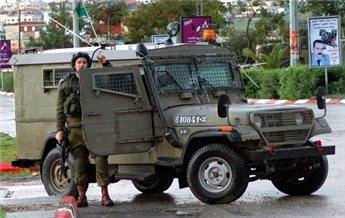 Israeli soldiers invaded, earlier on Thursday, Hebron city in the southern part of the occupied West Bank, and several nearby towns, searched many homes and kidnapped ten Palestinians, including one woman.Media sources in Hebron said the soldiers invaded Hebron city, and the towns of Beit ‘Awwa, Beit Ummar, Taffouh and ath-Thaheriyya.

The sources said the soldiers have kidnapped Su’ad Abdul-Karim Erzeiqat, 23, after storming and violently searching her home in Taffouh town, northern of Hebron.

Ma’zouz, who deaf and mute, is the brother of Ja’far Awad, 22, who died on Friday April 10, 2015, shortly after his release from an Israeli prison, after the Prison Authority denied him access to specialized and adequate medical attention while in prison.

His cousin Ziad ‘Omar ‘Awad, 28, was shot and killed by Israeli army fire, after the soldiers attacked Ja’far’s funeral procession.

In addition, the soldiers summoned Moayyad Bahjat al-‘Allami, 23, for interrogation in the Etzion military base, and searched the home of Emad Ekhdeir Awad, after smashing the front door of his property.

It is worth mentioning that the army has kidnapped 87 Palestinians, including 40 children, in Beit Ummar alone, this past month.