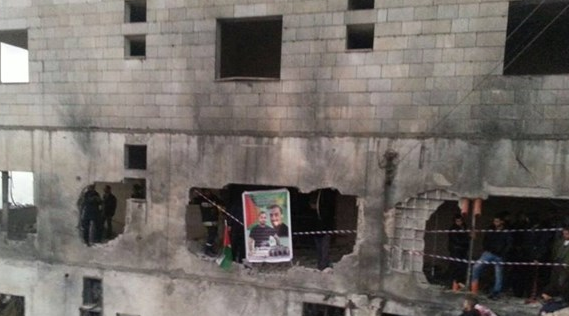 Dozens of Israeli military vehicles invaded, in the early morning hours of Thursday, the Dahia area, south of the northern West Bank city of Nablus, and detonated a home belonging to detainee Ragheb ‘Oleiwy, who stands accused of killing two Israeli settlers.Israel believes Oleiwy is the head of “a cell that shot and killed an Israeli settler and his wife,” near Beit Forik town, approximately two months ago.

Palestinian security sources in Nablus said hundreds of Israeli soldiers invaded the Dahia area, after isolating it, and surrounded the home of Oleiwy, before forcing the family out.

The soldiers then wired the home and detonated in, in an offensive that last for nearly three hours.

The invasion led to clashes between the soldiers and local youths in different parts of Nablus; a young Palestinian man was shot with a rubber-coated steel bullet in his face, and was moved to the Rafidia Governmental Hospital, in Nablus, suffering moderate wounds.

The demolition of Palestinian home comes following a ruling by the Israeli High Court, although the case is still standing against the detainee in a military court.

The building is composed of four floors, each contains two apartments.

‘Oleiwy was taken prisoner on October 3 of this year, just two days after the shooting; he is a married father of one child.

On October 20, the Israeli army handed the Oleiwy family a military order for the demolition of their home, and granted them two days to appeal the decision; the family filed an appeal to the High Court but it rejected it.

On November 14, the Israeli army demolished three homes of Palestinians, believed to be members of the cell that allegedly carried the deadly shooting out.

The demolition came less than two days after the High Court authorized it, without allowing the families to appeal the ruling. The three Palestinians are Karam al-Masri, Yahya al-Haj Mohammad and Sameer Kousa.