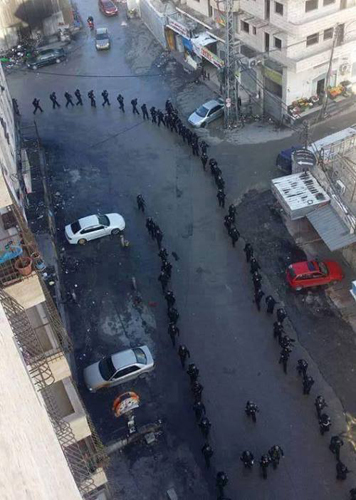 Medical sources in Shu’fat refugee camp, north of occupied Jerusalem, has reported that 43 Palestinians have been injured, during the massive Israeli military invasion into the camp, starting earlier on Wednesday. The soldiers completely surrounded and isolated the refugee camp before invading it.The sources said thirteen Palestinians were shot with rubber-coated steel bullets, while thirty others received treatment for the effects of teargas inhalation.

The invasion was carried out by more than 1200 Israeli soldiers and military police officers, to demolish the home of Ibrahim al-‘Akkari, who was killed in Jerusalem last year, allegedly after a “car attack,” while many eyewitnesses back then said the man lost control of his vehicle. He was repeatedly shot by the police after the incident.

Following the invasion, the soldiers wired and demolished al-Akkari home, completely destroying it, and causing excessive damage to many nearby homes and buildings.

Clashes took place between the invading soldiers and dozens of local youths.