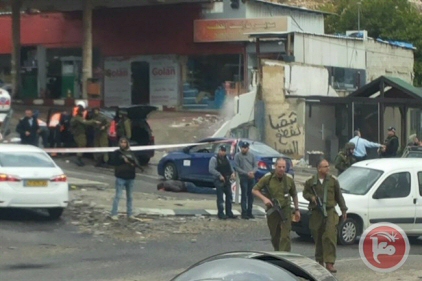 A Palestinian was shot and killed after opening fire on Israeli soldiers stationed at the Hizma military checkpoint, to the north of Jerusalem, in the occupied West Bank, that left two injured, the Israeli army and emergency services said.An Israeli army spokesperson told Ma’an News Agency that forces opened fire on a Palestinian man after he exited his vehicle and opened fire on the forces.

The spokesperson confirmed the suspect’s death and said an Israeli soldier was shot in the upper body, adding that one bystander was injured.

Israeli emergency service Magen David Adom said that paramedics arrived to the scene and treated one victim who was in severe condition.

Israeli media reported that the bystander was a 47-year-old Israeli man left with critical injuries, while the soldier received a gunshot wound to the hand.

Photos released following the incident suggest the attack may have taken place down the road from the checkpoint.

The attack is the latest in an escalation of violence that began in October and has continued full-fledged into the first days of December.