Israel to Retaliate over Settlement Labeling 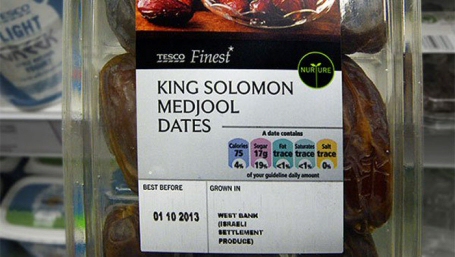 Israel is expected to complicate relations with EU countries over settlement labeling.In response to recently issued EU directives about labeling the origin of settlement products, Netanyahu suspended Israeli dialogue with the EU on the peace process.

The last meeting on the Israeli-Palestinian peace process was in 2014 and EU involvement was minor.

In addition to suspending EU involvement in the peace talks, Israel plans to complicate relations with the six countries that the foreign ministry identified as the primary promoters of the EU’s decision to label Israeli settlement products – namely, Sweden, Belgium, Ireland, France, Luxemburg and Malta.

Walla! News quoted a senior Israeli official saying that though Israel “cooperated” with some of these countries in the past to institute projects to rehabilitate the Gaza Strip and strengthen the Palestinian Authority, “this is going to change – they will begin to encounter difficulties and obstacles.”

“The goal” of this new attitude, the official said, is “to clarify to the countries that pushed for the product labeling that their actions have a price in the Palestinian arena.”

But at the same time as Israel flaunts its ability to penalize supporting countries via Palestinians for the EU’s ruling, Israeli representatives maintain that labeling settlement products is an uncalled for form of discrimination against Israel.

Speaker of the Knesset Yuli Edelstein on Wednesday evening, 2 December 2015, spoke to a special session of the Bundestag’s Committee on Foreign Affairs and Defense Committee — the pinnacle event of the Knesset delegation’s official visit to Germany this month to mark 50 years since the establishment of relations between Israel and Germany.

Edelstein described it as “unfortunate” that ‘Europe has become fertile ground for BDS organizations that employ improper methods such as economic and academic boycotts against Israel.”

He thanked committee members for their opposition to the EU’s labeling plan, deeming it an “outrageous measure” that operates “according to a double standard and out of blind hatred.”

Then, ignoring the fact that since Israel’s inception the government has targeted Palestinians as a people for – often, deathly – discriminatory treatment, Edelstein told the committee: “‘where they burn books, they will also ultimately burn people,’ Heine wrote, and I fear that where goods are labeled according to the place in which they were manufactured, people will be labeled according to their ethnicity.”

In this sense, to denounce the EU’s decision, Israel is threatening to worsen Palestinians’ access to international support. Then, to distract from the way such a threat unfairly targets an entire population and is emblematic of Israel’s mistreatment of Palestinians, Israel levels the hypocritical claim that the EU’s decision is baseless and unfair to Israel.

Israeli officials are also acting on Netanyahu’s call to cease cooperation with countries that promoted the EU’s decision to label Israeli settlement products.

Channel 10 reported that Netanyahu recently rejected a request from the Belgian foreign minister to meet during his visit to the region, as did Deputy Foreign Minister Tsipi Hotovely.

But, Israel is more forgiving of some countries than others. While maintaining that Israel is “angry” at France, an Israeli official said that France is “in a little different category than the rest of the countries.” Fittingly, Deputy Foreign Minister Tsipi Hotovely will travel to France in two weeks, where she plans to discuss the EU’s decision with French officials.