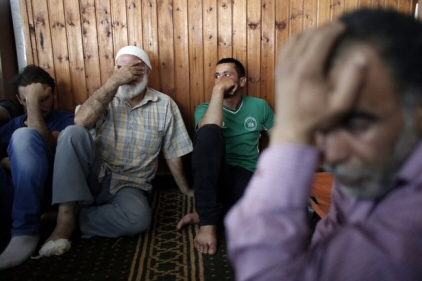 Several Israeli youths connected to Jewish extremist organizations have been arrested by Israeli forces for suspected involvement in a fatal arson attack on a Palestinian family in July, Shin Bet said on Thursday.An Israeli police spokeswoman for Arab media, Luba al-Samri, confirmed that police ‘recently arrested young men suspected of membership in a Jewish terrorist organization, and of carrying out different terrorist attacks.’

‘Specific suspicions are being examined about involvement in the abominable terrorist attack of torching the home of the Dawabsha family in the Palestinian town of Douma,’ she added.
The information about the arrests was released after a weeks-long gag order was partially lifted on investigations into those responsible for the murder of three members of the Dawabsha family in the Palestinian village of Douma outside of Nablus.

All other information regarding the investigation is still under a gag order requested by the Israeli police.

Suspects involved in the attack were identified by Israel’s defense establishment in September but no charges were filed at the time, Israeli daily Haaretz reported.

On July 31, suspected Israeli settlers smashed the windows of the Dawabsha family home before throwing flammable liquids and Molotov cocktails inside.

Locals told Ma’an News Agency, at the time, that the words ‘revenge’ and ‘long live the Messiah’ were sprayed in Hebrew on the site of the house.

The attack sparked criticism from the international community for Israel’s failure to hold Israeli settlers and Jewish extremists accountable for attacks on Palestinians, in effect being complicit in such attacks.
Israeli leadership at the time condemned the Dawabsha attack as ‘terrorism,’ and pledged to bring the perpetrators to justice.

‘Official condemnations of this attack are empty rhetoric as long as politicians continue their policy of avoiding enforcement of the law on Israelis who harm Palestinians, and do not deal with the public climate and the incitement which serve as backdrop to these acts,’ the group said, at the time.

Thursday’s partial lift on the gag-order came one day after the United Nations Special Coordinator for the Middle East Peace Process, Nickolay Mladenov, criticized Israel for the ‘slow progress’ in investigating the arson.

Updated from: Israeli Hospital Bills the PA for Medical Treatment of Dawabsha Child.