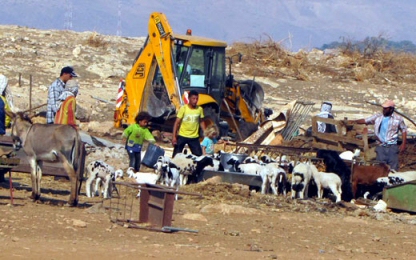 The EU missions in Jerusalem and Ramallah made a statement, this Friday, regarding the recent demolitions and confiscations of Palestinians houses and structures in Area C.It reads as follows, according to the PNN:

The EU missions in Jerusalem and Ramallah express deep concern, once again, at an increasing number of demolitions and confiscations of Palestinian structures in Area C in recent days.

These include repeated demolitions and confiscations of human and animal shelters at Al Hadidiya in Tubas Governorate in late November and the dismantlement and confiscation of tents there on 3rd December.

The latter were provided through the European Union in response to humanitarian need. In addition on 18th November, the community in Fasayil, already subject to demolitions in August, received verbal warnings of Israel’s intention to carry out further demolitions.

All of the communities affected are herder communities mainly depending on livestock. They are particularly vulnerable, faced with homelessness, potential displacement and at risk, especially as winter approaches.

The EU missions in Jerusalem and Ramallah call on the Government of Israel to return the confiscated EU humanitarian assistance to the community in Al Hadidiya in order to ensure the community’s physical protection in its place of living ahead of the winter season.

The EU missions in Jerusalem and Ramallah recall the Foreign Affairs Council Conclusions of 14 May 2012 and 20 July 2015, in which the EU called upon Israel to meet its obligations regarding the living conditions of the Palestinian population in Area C as well as its strong opposition to Israel’s settlement policy and actions taken in this context, such as building the separation barrier beyond the 1967 line, demolitions and confiscation – including of EU funded projects – evictions, forced transfers including of Bedouins, illegal outposts, settler violence and restrictions of movement and access.