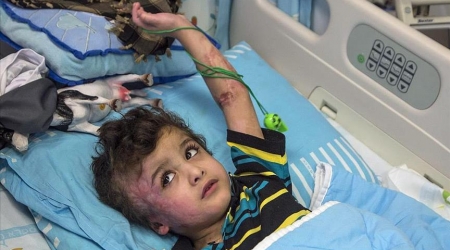 Ahmad Dawabsha does not sleep as easily as other children.He breathes heavily and fidgets in discomfort. The four-year-old’s body is positioned however his injuries allow, with his face framed by the beige body suit that protects him from his burns.

Four months after the arson attack by Israeli settlers that killed his parents and 18-month-old brother Ali, Ahmad’s family nervously watch over him in his sleep.

‘Yesterday his grandfather phoned me and said he’s shouting ‘they burned us, they burned us.’ It was the same thing he said when he first woke up [after the attack],’ says Nagham Qasem, 44, who helps care for Ahmad. ‘Last week, he was saying in his sleep ‘bring me daddy.’ We had to wake him up to stop the dream.”

He does not yet know it, but Ahmad is the only remaining member of his household. His younger brother Ali died in the fire while his father and mother succumbed to their injuries in the weeks after a petrol bomb burned their home in Douma, near the occupied West Bank city of Nablus.

In his sleep and while awake, Ahmad’s attention frequently turns to his family, says Qasem, who is not related to the Dawabsha family but began helping them care for Ahmad after she saw pictures of him posted on social media, following the attack.

He talks about his father as a hero who could wrestle lions and he worries about Ali, whom he believes is at home alone and will be scared of the dark while his parents, as he believes, are in the hospital. Anytime Ahmad receives a present, he promises to take it home to share with his baby brother, says Qasem.

“It feels like knives are stabbing my heart [when he asks about his parents] because I don’t know how to answer him. I can’t lie to him but I also can’t tell him the truth,” his grandfather, Hussein Dawabsha, tells Anadolu Agency.

There is no doubt in Hussein’s eyes when he says the day Ahmad returns home ‘will be the hardest day ever.’

‘He will be imagining his parents and brother waiting but they won’t be there. He will expect a big party and all the family and friends. But [when he finds out] even if we build him a big castle [it wouldn’t be enough.] He would just want to keep to his own small room. Only Allah can help him,” says Hussein.

The fatal attack that orphaned Ahmad and killed his infant brother caused widespread anger that many analysts believe was the source of the current heightened violence that has killed 114 Palestinians and 22 Israelis or foreigners since Oct. 1.

Part of the anger stemmed from a lack of arrests months after the attack, despite Israeli President Reuven Rivlin having already indicated that the authorities knew who was responsible. On Friday, Israel announced, without revealing details, that it had arrested suspects for the murder, which the government described as terrorism.

“I feel the same now as I have since the attack. I’ve been sad and depressed. For me, these arrests don’t change anything, I don’t believe in their justice,” says Hussein.

Nasser Dawabsha, the oldest brother of Ahmad’s father Saad, says Israel wanted to appear to be acting on the case after the U.N. envoy to the Middle East Nickolay Mladenov criticized the lack of progress in the investigation.

‘We don’t trust the Israeli legal system because afterward they will say that they are crazy people and even if they are sentenced they will soon be released,’ says Nasser.

This week, a man accused of leading the kidnapping and burning to death of Palestinian teen
Muhammad Abu Khdeir, last year, had his conviction delayed after making a last minute insanity plea.
‘The Israeli law system is racist when it comes to the Palestinians, this system says that even if we were subject to Israeli terror then we can’t ask for compensation or rights because the attackers are Israelis,’ Nasser says.

For the grandparents, aunts and uncles gathered by Ahmad’s bedside, the focus is on his health.
They say his condition is improving: he is able to use his left hand, but not his right, and though he can’t walk, he is now able to sit up. After months in the hospital, the family say he enjoys using a toy bicycle, that occupies a corner of his room, to roam around the hospital.

Later on Friday, Ahmad’s uncle Nasser sent Anadolu Agency pictures taken on his mobile; an awake Ahmad, laughing and raising his fingers in a peace sign. 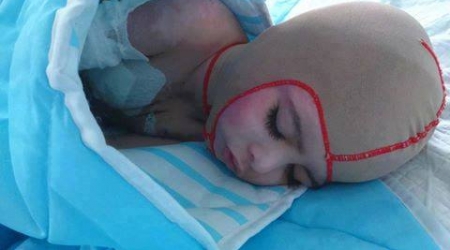