Many Palestinians Injured In Tulkarem, Nearby Communities 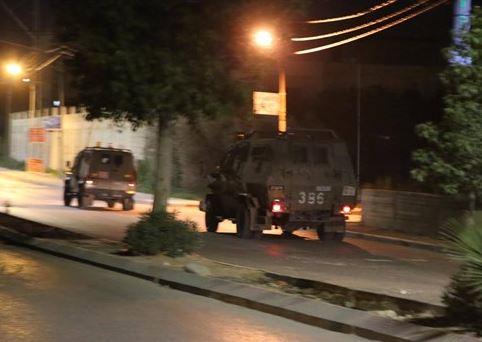 Medical sources have reported, on Wednesday at night, that many Palestinians have been injured after Israeli soldiers invaded Tulkarem city, and several nearby communities, following the shooting that targeted an Israeli settler, who was involved in terrorist deadly attacks against the Palestinians; the settler, and his wife, were injured.The sources said three Palestinians were shot with live rounds, after Israeli soldiers invaded the Tulkarem refugee camp, while at least five others suffered the effects of tear gas inhalation.

The soldiers invaded and ransacked several Palestinian homes, especially in the area of the shooting, and confiscated surveillance tapes.

The soldiers also kidnapped at least two Palestinians, during clashes in the Tulkarem refugee camp.

In addition, dozens of soldiers invaded a number of villages and towns, in Tulkarem district, and searched homes.

The soldiers invaded Ezbet Shoufa village, closed the road between it and the Avnei Hefetz illegal colony, and fired dozens of flares, causing fired in Palestinian agricultural lands.

The wounded Israeli settler is from the Avnei Hefetz, built on Palestinian lands belonging to residents from Shoufa and Kafr al-Lobbad towns, southeast of Tulkarem.

Resident Omar Sa’dy said the soldiers invaded his home, in Ezbet Shoufa village, searched the property while pointing their guns at him and his family, and confiscated surveillance tapes.

Soldiers and undercover officers also invaded various neighborhoods in Tulkarem city, closed all of its southern roads, and isolated nearby villages.

Clashes took place in the center of Tulkarem city, especially near the Dr. Thabet Thabet Junction and the Eastern Neighborhood.

The soldiers fired dozens of gas bombs and concussion grenades, and prevented Palestinian ambulances from entering the areas of clashes.

It is worth mentioning that the wounded Israeli man, Shaul Nir, was involved in terrorist attacks against the Palestinians, including the 1983 shooting and hand grenade attack targeting the Islamic University in Hebron, leading to the death of three Palestinians and the injury 33 others.

An Israeli court sentenced him, and his accomplices, to life in prison, but in 1990, the then Israeli President Chaim Herzog ordered his release; he served only seven years for his deadly terrorist attacks.