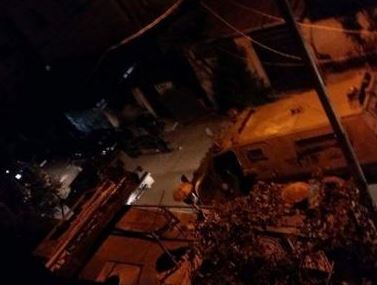 The soldiers also invaded the family home of Yosri Zakariyya Miswada, 21, who was shot dead by the army on Wednesday, in addition to the home of resident Majed Abdul-Qader.

In Yatta nearby town, the soldiers searched a number of homes, and kidnapped Obeida Mohammad Emheimed, 20, while resident Emad Jamal Mousa Abu al-Jadayel, 21, was kidnapped from his home in the as-Sammoa’ town, south of Hebron.

On Wednesday evening, the soldiers kidnapped a Palestinian from the al-Fawwar refugee camp, south of Hebron, after stopping him on the Container Roadblock, east of occupied East Jerusalem.

The Palestinian, identified as Mohammad Emad az-Zeeda, 20, was heading back home from Al-Quds University, where he studies medicine.

On Wednesday at night, three Palestinians from Jenin were taken prisoner, after the police stormed a construction site in Affoula, near Nazareth.