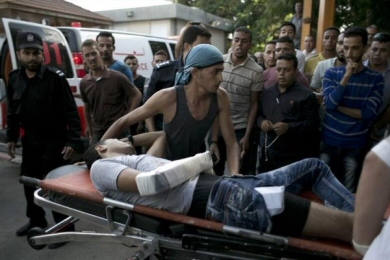 Israeli military forces, on Friday, shot dead a Palestinian and injured 17 others in clashes east of al-Bureij refugee camp, in the central Gaza Strip, Palestinian officials said. Separately, Israeli forces shot dead two other Palestinians in the occupied West Bank.Ashraf al-Qidra, spokesperson of the Ministry of Health, identified the victim as Sami Shawqi Madhi, 41. He was shot in the chest and died instantly, al-Qidra added.

Ten other Palestinians were injured during the clashes and taken to hospital for treatment, according to Ma’an. Israeli forces opened fire at demonstrators along the border east of al-Bureij refugee camp and at the Nahal Oz crossing, where protesters set fire to tires.

Locals said Israeli snipers were deployed in the area.

There were also reports of clashes near Khan Younis in southern Gaza, and the Erez crossing in the north, where seven were injured by live fire in their lower extremities, al-Qidra said.

An Israeli army spokesperson said that, “throughout the day, hundreds of Palestinians violently rioted along the Gaza Strip border near the security fence.”

The spokesperson said that after calling on the “rioters” to halt, Israeli forces opened fire “in order to stop the threat of infiltration” after “the rioters breached the buffer zone and attempted to damage the security fence.”

Israeli forces shot and killed a Palestinian after an alleged attempted car ramming attack in the southern occupied West Bank district of Hebron’s Halhul village, according to the Israeli army.

An Israeli army spokesperson said ‘a Palestinian attempted to ram his vehicle into [Israeli] security forces near Hebron,’ adding that Israeli forces responded to the ‘imminent threat’ and opened fire, killing the man.

No Israelis were injured in the alleged attempted attack.

The Palestinian has been identified as Omar al-Hroub, 55, from Deir Samit village in western Hebron.

Shortly after, Odai Ersheid, 24, was shot in the chest and critically wounded during clashes with Israeli military forces at the northern entrance to Hebron. He later died from his injuries.

The clashes broke out following a march called for by Hamas to mark the 28th anniversary of the political party’s founding.

Red Crescent officials said that nine Palestinians were shot with live fire and three with rubber-coated steel bullets during the clashes. The injured were taken to a Health Work Committee center for medical treatment.

An Israeli spokesperson said that ‘a violent riot in Hebron is taking place with hundreds of Palestinians attacking forces, hurling rocks and rolling burning tires.’

Uday’s sister, Dania, was shot and killed by Israeli forces in Hebron on Oct. 25.

The 17-year-old was shot dead after police officers allegedly saw ‘a knife in her hand.’ No Israelis were injured during the incident.

A witness said, at the time, that he saw a schoolgirl with a schoolbag on her back trying to cross the Israeli checkpoint near the Ibrahimi mosque.

‘An Israeli soldier asked her to take the knife out of her bag, then he immediately fired gunshots into the air,’ the witness said. ‘Seconds later the schoolgirl was lying on the ground bleeding.’

Following an investigation into several cases of Palestinian deaths, Amnesty International found that Dania’s killing was ‘absolutely unjustified’ and called for Israel to end its ‘pattern of unlawful killings.’
Earlier Friday, Omar al-Hroub, 55, was shot and killed after an alleged attempted car ramming attack in the southern occupied West Bank district of Hebron’s Halhul village.

An Israeli army spokesperson said ‘a Palestinian attempted to ram his vehicle into [Israeli] security forces near Hebron,’ adding that Israeli forces responded to the ‘imminent threat’ and opened fire, killing the man.

No Israelis were injured in the alleged attempted attack.