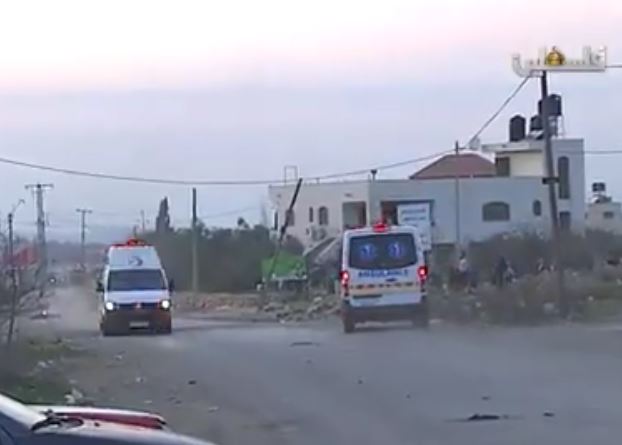 Israeli soldiers shot and injured, Friday, 22 Palestinians near the western entrance of Silwad town, east of the central West Bank city of Ramallah; seven of the wounded were shot with ‘Toto’ live rounds; one of them suffered a serious injury.Medical sources said seven Palestinians were shot with the illegal Toto live rounds, which detonate upon impact causing larger and more extensive damage, and that most of them were shot in their lower extremities.

The seriously wounded young man was shot in his abdomen; bullet fragments penetrated his liver and exited through his back.

Another young man suffered a moderate injury after the army shot him in his abdomen.

The sources added that fifteen other Palestinians were shot with rubber-coated steel bullets, and dozens suffered the effects of tear gas inhalation.

A young woman suffered retina damage due to severe effects of gas, after the soldiers fired a gas bomb into her family’s home, while five family members suffered the effects of tear gas inhalation.

In addition, the soldiers targeted medics, opened fire on a Red Crescent ambulance causing damage to its windshield, and searched an ambulance while transferring a wounded Palestinian to a hospital.

The invasion and clashes took place after the soldiers attacked hundreds of Palestinians, holding a protest demanding Israel to allow the transfer of the body of Anas Hammad, who was killed last week, back to his family for proper burial ceremonies.