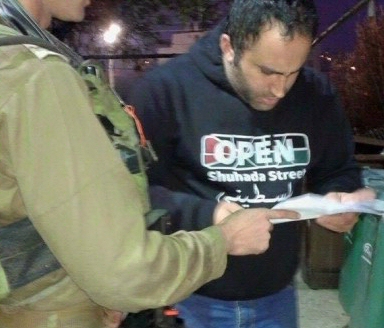 Israeli forces, on Saturday night, issued threats against Youth Against Settlements with regard to the possible closure of their headquarters in Tel-Rumeida, central Hebron, southern occupied West Bank.Group coordinator Issa Amr said that the threats come in light of military expansion in Tel-Rumeida, which are facilitating constant pressure from settlers in the area, according to the PNN.

One month ago, forces served another closure threat, after Youth Against Settlements caught on tape an Israeli settler executing a Palestinian in cold blood, in Tel Rumeida.

Prior to this, the group had also exposed another execution of a Palestinian girl in Tel Rumeida.

Hadeel Hashlamoun, about two months ago, was gunned down by Israeli soldiers who claimed that she tried to initiate a stab attack. The photos taken by the group showed zero signs of attack.