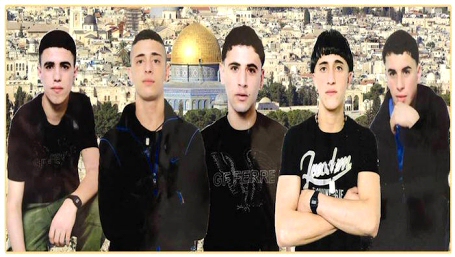 Failure to pay this amount will likely result in another 10 years of prison time added to each boys’ sentence.

The boys have been in an adult Israeli prison for 2 years and 8 months already, accused of throwing stones at a settlers’ car.

The boys’ arrest stemmed from an accident in March 2013, when a settler driving with her three daughters crashed into a parked truck on Route 5.

The settler’s children were severely injured. One child died this year from the injuries she sustained in the accident, compounded by pneumonia.

Though the truck driver originally testified that he had pulled over on the road due to a flat tire, he later claimed that he had also seen rocks on the side of the road.

But, none of the allegedly affected Israelis contacted the police.

Consequently, there are no eyewitnesses to corroborate the claim that anyone had been throwing stones that day, much less caused this particular accident.

Nevertheless, Israeli authorities labeled the accident as a “terrorist attack” and conducted night raids in the nearby village of Hares. Nineteen boys, all between 16 and 17 years old, were detained.

After subjecting the minors to solitary confinement and denying them legal representation for days or even weeks at a time, the Israeli authorities released all but five boys, claiming that they had confessed to the crime.

However, the five imprisoned boys and their families maintain that the boys’ confessions were forced, extracted by torture and threats.

The sentencing of the Hares boys is another clear example of the way the Israeli court system functions to criminalize Palestinians, without any concern for due process or any notion of justice.

The Israeli military court system convicts 99.7% of the Palestinians that come before it.

In a press release, the Free the Hares Boys campaign calls for local and international human rights organizations and people of conscience to demand justice for the Hares Boys.

More stories like this at the Alternative Information Center.