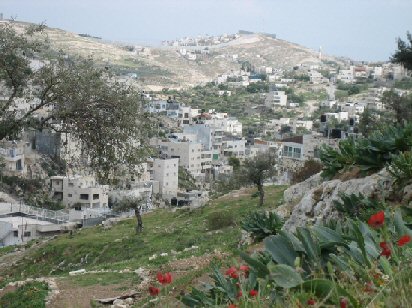 Israeli authorities, on Sunday, notified two families living in the Silwan neighborhood of annexed East Jerusalem of intentions to evict, under claims they are owned by non-governmental Jewish organizations.WAFA correspondence said that Israeli police served a member of the Rajabi and Basbous families, from Jerusalem, a notification ordering them to leave their two homes, both of which are located in Silwan.

Local activists claim that about 80 real estates in Silwan are expected to be taken over by Jewish groups.

This is not the first time Israeli authorities have asked Palestinians from East Jerusalem to leave their homes under such a pretext.

On August 5 of 2015, Israeli police asked two East Jerusalem Palestinian families, Sabri and Abdullah Abu-Nab, to leave their homes under the pretext of absentee ownership.

Israel has instituted a series of mandatory laws, regulations and policies to legalize the confiscation of Palestinian lands and property, and prevent them from returning to their homes.

Palestinian land was deemed “absentee property”, based on the 1950 Absentee Property Law, while the control of the land was transferred to governmental and semi-governmental agencies, such as the Jewish National Fund and Israel’s Land Administration, for the sole benefit of Jewish Israelis.

Under this law, Palestinian refugees and the internally displaced are regarded as “present absentees” — designations which authorized ‘legal’ confiscation of their land — the implication being that the majority of Palestinian lands were lost.

The law was first enacted and took effect in 1950, after the great population influx that Israel experienced in its early days as an officially recognized state, as thousands of Palestinian Arabs were forced to flee the city for fear of being killed. The law was approved by the Supreme Court of Israel on April 16, 2015.

Secretary General of the Islamic-Christian Committee to Support Occupied Jerusalem and Holy Sites, Hanna Essa, denounced the court’s decision, and said such property belongs to thousands of indigenous Arab and Palestinian residents who were forced out of their homeland, following the 1948 and 1967 wars.

Editor’s note: According to UN statistics, Palestinians now make up the largest refugee population in the entire world.

Palestinian grassroots Anti-Apartheid Wall Campaign declared that, “By classifying every citizen or persons present in an “enemy” territory or country as an “absentee” vis-à-vis property in Israel, the law has served to confiscate the land and real estate left behind by the Palestinians who were forcibly displaced in 1948.”

Most Palestinians in the occupied territories became de facto “absentees” with regard to property in East Jerusalem, which was unilaterally and illegally annexed by Israel in 1967.

Israel’s annexation and extension of the Absentees’ Property Law to occupied East Jerusalem is in direct contravention of international law, and has been strongly condemned by the United Nations.