Army Kidnaps Nine Palestinians In Hebron, One In Jerusalem 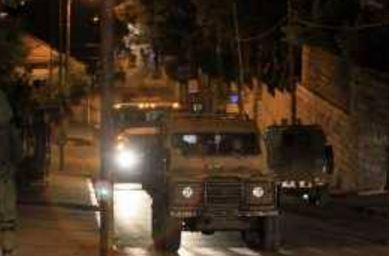 Another Palestinian, identified as Ishaq Ismael Houshiyya, was kidnapped from his home in Yatta town, south of Hebron.

In addition, the soldiers searched many homes in Hebron city, installed roadblocks on the its entrances , in addition to Sa’ir and Halhoul towns, before stopping and searching dozens of cars, and examined the ID cards of scores of Palestinians.

Also on Monday at dawn, the soldiers conducted searches of homes in Qaryout village, in the northern West Bank district of Nablus, and kidnapped eight Palestinians.