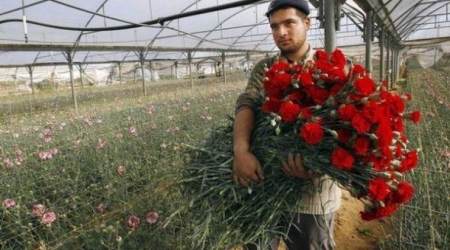 For the third year in a row, the farmers in the Gaza Strip will not be able to export flowers to European markets, due to Israeli restrictions.Since Dutch funding for the Gaza farmers was stopped three years ago, farming spaces shrank in size, ultimately affecting the amount of flowers produced throughout the year. Farmers now plant only 15 dunams of flowers, after planting nearly ​​150 dunams previously, according to Al Ray.

50-year-old Gaza farmer, Ibrahim Siyam, was cultivating more than 13 dunams, but the area was gradually reduced to nine dunams as a result of the Israeli blockade on the region.

Siyam explained that most of farmers refrained from farming flowers due to the high cost and low benefits, as they cannot exports their products.

The Gaza Strip exported about 50 million flowers, annually, to Europe until 2004. But, farmers in 2012 were able to export no more than five million flowers, because of repeated Israeli closures and constraints at borders crossings.