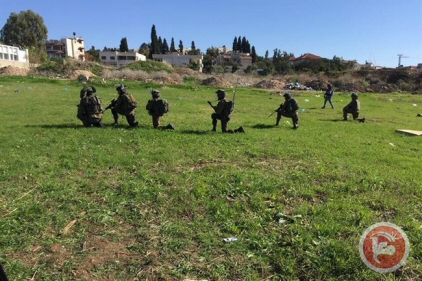 Israeli forces, on Wednesday, shot and injured 15 students with both rubber-coated steel bullets and live fire, during protests at Palestine Technical University, in the northern occupied West Bank district of Tulkarem, medical sources at the Red Crescent said.According to Ma’an News Agency, five youths were shot and injured with live fire, while 10 more were shot with rubber-coated steel bullets and at least four suffered from severe tear gas inhalation. Four of those shot with rubber-coated bullets were treated at the scene, while the rest of the 19 injured were evacuated to a nearby hospital.

In addition, 25 other students suffered from moderate tear gas inhalation and were treated at the scene by medics.

Witnesses said that Israeli forces opened fire at the students during a protest which erupted into clashes. During clashes, Israeli forces raided the campus.

Following student-organized marches that started in October, in protest of Israeli violations and raids onto the university campus, administrators reported that Israeli forces had positioned themselves at a temporary base on the campus.

A head administrator of the university, Dirar Elayyan, said earlier this month that non-students then began to enter the campus and throw stones at the Israeli base, prompting violent clashes that have severely interrupted normal campus life and left several students seriously injured.

The university reportedly began preparations to build the wall to prevent the entrance of outsiders, last month. However, Israeli forces stopped the construction and confiscated a bulldozer, assaulting workers, Elayyan said.