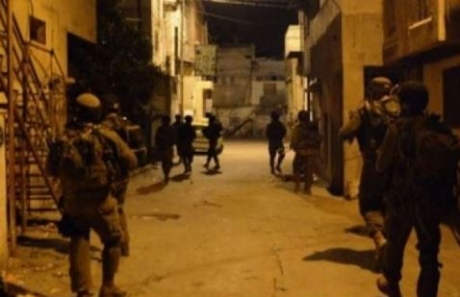 At least 10 Palestinians were injured, including three with live ammunition, during clashes with Israeli troops who stormed Deheishe refugee camp near Bethlehem, late Tuesday night, according to local sources.Witnesses told WAFA that an Israeli army force broke into the camp at midnight and raided multiple homes, provoking clashes with the youth.

About 50 others also suffocated due to inhaling teargas used by the Israeli troops.

Five other local Palestinians were abducted during the military incursion. They were identified as Yazan Juaidi, 18, Hamdi Atrash, 24, Mohammad Atrash, 22, Amad Shamroukh, 22, and Ahmad Ja’fari. Army also handed notices to other Palestinians in the camp to appear for interrogation.

To be noted, about 124 Palestinians have been killed by Israeli fire since the beginning of unrest in the West Bank and Jerusalem in early October 2015. Over 13,000 others have been injured.