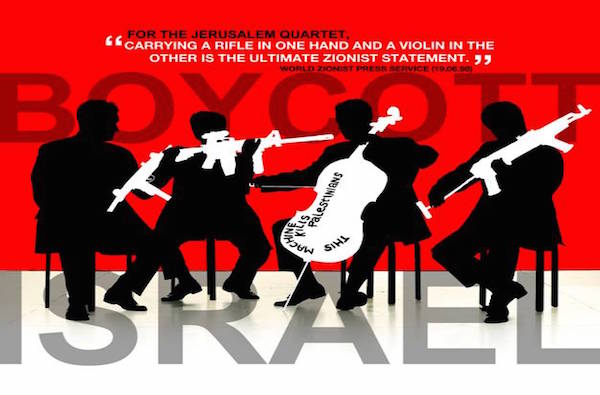 The Jerusalem Quartet, an Israeli string quartet that has toured around the world and received numerous awards, recently performed in Lisbon, Portugal.During the performance, BDS activists disrupted the concert by blowing whistles, chanting against the Israeli occupation, and calling for a boycott of Israel.

This isn’t the first time the quartet has been confronted by protesters during their performances; for years, activists have disrupted their concerts around the world.

Activists cite the quartet’s decision to name itself after Jerusalem and its members’ service in the Israeli military as “Distinguished Musicians” as clear evidence of the artists complicity in representing and branding Israel as anything but an apartheid state to the international community.

A member of the Jerusalem Quartet countered in 2010, ‘We are musicians. We want our audiences to enjoy our music, whoever they may be, whatever their religion or nationality or ethnicity, without unthinking interruptions.’

But, as the recent protest in Lisbon shows, activists will not let Jerusalem Quartet members forget that though they may publicly espouse equality, their happy association with Israel is contradictory to any notion of equality or justice.