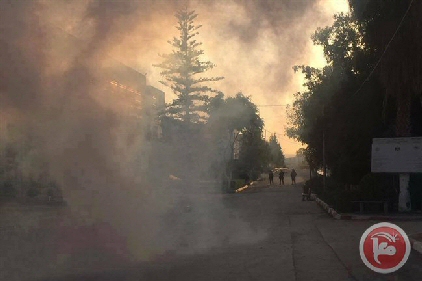 At least 9 Palestinian students were shot and injured on Sunday, when clashes broke out with Israeli forces outside a university in the occupied West Bank city of Tulkarem.Clashes erupted after a group of Israeli soldiers deployed at an Israeli military base illegally set up on the campus of Palestine Technical University-Kadoorie, locals told Ma’an News Agency.

Soldiers reportedly advanced towards university buildings, where they were confronted by students throwing stones.

Dozens of others suffered from excessive tear gas inhalation, medics went on to say.

An Israeli army spokesperson did not have immediate information on the incident.

Violence on the campus of Palestine Technical University has been near-daily in recent weeks.

Palestinian leadership has recently requested international protection for Palestinians in the occupied Palestinian territory amid a recent increase in violence, but concrete moves have yet to be made to address the request.