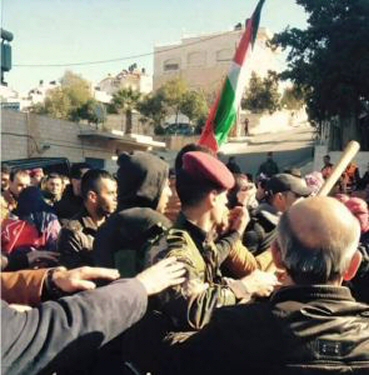 The PFLP issued a communique, emphasizing that the security forces attacked the participants in the march, beating marchers, journalists, and media workers, causing injuries and attempting to prevent coverage of the attack. This crackdown went as far as confiscating journalists’ cameras.

The Front stressed that the crackdown is inconsistent with national principles and reiterated its call for an immediate end to the Palestinian Authorities security cooperation between the PA and Israeli occupation forces.

The Al-Fatah led Palestinian Authority has repeatedly promised to end its security cooperation with Israel. Usually such promises were made during negotiations with Israel and/or when Al-Fatah and the PA were facing strong domestic opposition. None of such promises have ever been converted into tangible measures.

Al-Fatah and the PA have also been accused to use the security cooperation with Israel to crack down on and imprison members of opposition parties, such as PFLP Secretary-General Ahmad Sa’adat, among many others. With regard to the Palestinian Authorities stance on a free press it is noteworthy that MADA, in 2014, reported that over 80% of Palestinian journalists self-censor.